Optomap detects 30% more than traditional dilation and is as simple as taking a photograph.

What Is an Optomap Retinal Exam?

The Optomap is a revolutionary diagnostic tool that allows our doctors to view the retina by taking an ultra-widefield (200°), high-resolution image in a single shot.  It’s as simple as taking a photograph. An Optomap image not only provides a permanent record that your doctor can reference in the future, but also allows patients to see the back of their eyes. An Optomap image detects 30% more than traditional dilation and only takes a quarter of a second to acquire.

Traditional dilation drops sting, take 30 minutes to kick in and require the doctor to evaluate the retina with a bright light for 5-10 minutes. Patient cooperation is key for the doctor to get a good view of the retina with dilation. After you leave the office, dilation will cause blurred vision and light sensitivity for 4–6 hours.  A majority of the time, Optomap can replace traditional dilation. 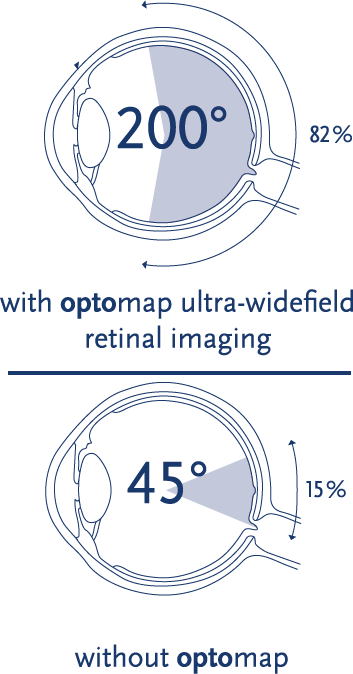 What Is the Retina?

The retina is the layer at the back of the eyeball containing rods and cones, cells that are sensitive to light. Rods and cones trigger nerve impulses that pass via the optic nerve to the brain. The brain interprets the nerve impulses and forms a visual image. Your retina is the only place in the body where blood vessels can be seen directly. A retinal exam facilitates early protection from vision impairment or blindness. Signs of systemic diseases such as stroke, cardiovascular disease, hypertension, diabetes and cancer can also be seen in the retina. Even before you notice any changes to your vision or feel pain, early signs of these diseases can show in your retina. A thorough screening of the retina is critical to verify that you are healthy.

Optomap Allows Your Doctor to View Different Layers of the Retina 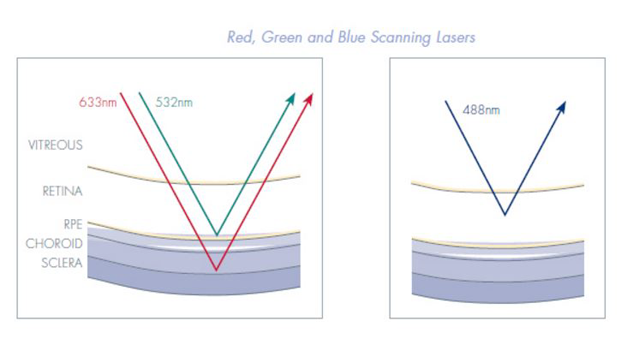 A study published in Eye and Brain suggests that adding an optomap® to a traditional BIO exam may improve sensitivity by up to 30%. Results from this cross-sectional study found good agreement between image-assisted and traditional fundus examination. In cases of disagreement, the adjudicator agreed with the image-assisted method in over 70% of cases. This suggests that adding nonmydriatic imaging, optomap UWF SLO in this case, to the clinical examination can improve the examiner’s ability to detect or rule out lesions by up to 30%.