What Is Glaucoma? Different Forms of Glaucoma Diagnosis Treatment

Glaucoma is scary because it usually does not cause any symptoms until it’s too late to bring back the lost vision.

Glaucoma is a family of eye diseases that leads to progressive damage to the optic nerve.  The optic nerve is a bundle of about 1 million individual nerve fibers that transmits the visual signals from the eye to the brain.  People with glaucoma loose optic nerve tissue, which eventually results in vision loss.  Glaucoma is scary because it usually does not cause any symptoms until it’s too late to bring back the lost vision,  and it’s the second-leading cause of blindness in the United States.  Glaucoma affects peripheral, or side vision, before it causes central vision loss. If left untreated, glaucoma can lead to complete loss of all vision/blindness.  Although glaucoma cannot be prevented, if diagnosed and treated early, it can usually be controlled with topical eye drops. 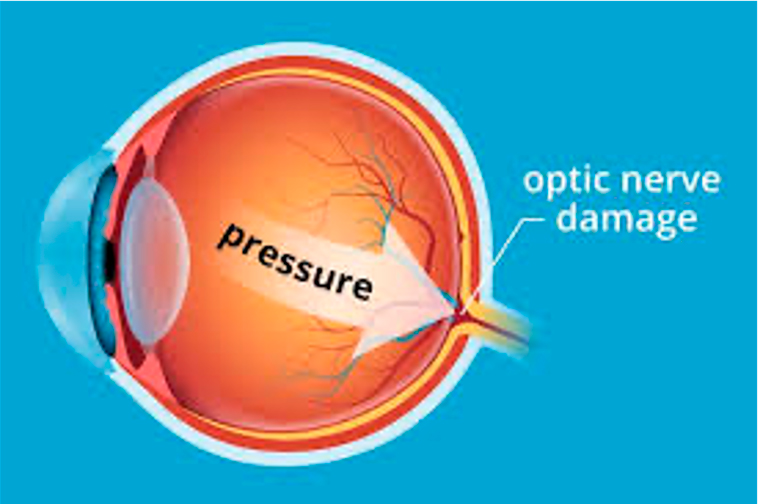 The American Optometric Association recommends an annual eye examination for people at risk for glaucoma. Depending on your specific condition, your doctor may recommend more frequent examinations.

Primary Open-Angle Glaucoma (POAG) is the most common form of glaucoma.  With POAG the fluid pressure inside the eye increases. This increase in pressure may cause progressive damage to the optic nerve.  POAG develops slowly and without any symptoms at first.  Unfortunately, many people are not aware they have the condition until they have significant vision loss.

Normal Tensive Glaucoma occurs when eye pressure remains within the “normal” range (under 21mmHg), but the optic nerve is damaged nevertheless.  It is not known why this happens.  People with low-tension glaucoma have an abnormally sensitive optic nerve.

Acute Angle-Closure Glaucoma (i.e. Narrow-Angle Glaucoma) is a less common type of glaucoma.  It usually occurs abruptly due to a rapid increase of pressure secondary to a blockage of the drainage structure in the eye.  Symptoms may include severe eye pain, nausea, redness in the eye, seeing halos or colored rings around lights and blurred vision. This is a medical emergency that can cause severe vision loss within a day of its onset.  See your eye doctor immediately if you experience these symptoms.

Secondary glaucoma is a type of glaucoma resulting from an injury or other eye disease. It may be caused by a variety of medical conditions, medications, physical injuries and eye abnormalities. Infrequently, eye surgery can lead to secondary glaucoma.

Glaucoma Suspect is someone whom the eye doctor is concerned may have or may develop glaucoma  because of an elevated pressure inside the eyes or an optic never with a suspect appearance.

Ocular Hypertension occurs when an intraocular pressure of greater than 21 mm Hg is measured in one or both eyes, but the optic nerves appear normal and no signs of glaucoma are evident on visual field testing.  Since not everyone with high eye pressure will develop glaucoma, ocular hypertension should not be considered a disease by itself. Instead, ocular hypertension is a term that is used to describe individuals who should be observed more closely than the general population for the onset of glaucoma.

How Is Glaucoma Treated?

Acute Angle-Closure Glaucoma is treated with a laser procedure called laser peripheral iridotomy. In this procedure, a laser beam creates a small hole in the iris to allow fluid to flow more freely into the front chamber of the eye where it then can drain.

There is no cure for glaucoma. Patients with glaucoma need to continue treatment for the rest of their lives. Because the disease can progress or change without warning, compliance with eye medications and undergoing eye examinations are essential and treatment may need to be adjusted periodically.

Keeping eye pressure under control can slow or stop damage to the optic nerve and continued loss of vision. Your optometrist may focus on lowering the eye pressure to a level that is least likely to cause further optic nerve damage. This level is often referred to as the target pressure and is likely a range rather than a single number. Target pressure differs for each person, depending on the extent of the damage and other factors. Target pressure may change over time. New medications to help fight glaucoma are always being developed.

Early detection, prompt treatment and regular monitoring can help to control glaucoma and reduce the chances for vision loss.